Trash and recycling services in the City of Taylor were greatly upgraded in June 13, 2016, thanks to a new agreement between the City and Rizzo Environmental Services. The council approved a transfer and revision of the current contract (with Midwest Sanitation) to Rizzo.

“When I took office in late 2013, I knew that we needed to make changes with Midwest,” Mayor Rick Sollars said. “We had significant issues with the private-public partnership and performance. When challenged, Midwest admitted that it could not improve its performance in various areas, which automatically opened the door for us to open negotiations with other firms and renegotiate and transfer the contract. We are extremely pleased with the level of services that Rizzo will offer our residents.” 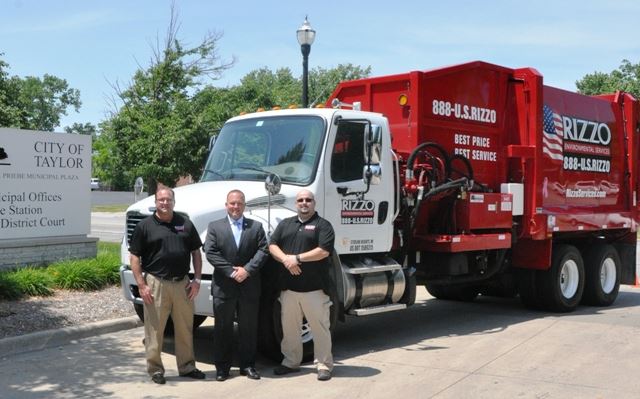 Those offerings include the following: As Mayor Sollars pointed out that the new agreement translates into are much greater services to all Taylor residents.  “You’re now looking at a ‘five-stop’ trash pickup weekly,” he said. “In essence, should residents require them, they will receive a regular trash pickup, recycling pickup, bulk pickup, yard waste pickup and even pickup from Simple Recycling (which is not affiliated with Rizzo) at the end of the cycle. This is a tremendous increase in service.” The free bulk-item pickup is a “huge plus” for Taylor residents, Mayor Sollars said. “The old agreement forced residents to pay a fee for bulk pickup, and that just wasn’t right,” he said. “I’m a resident myself, and if I’m paying taxes, I expect my garbage to be picked up. Within reason, I don’t expect to have to pay for ‘extra’ pickups. Rizzo will do that for us.” Transferring all services relating to trash pickup to Rizzo unburdens the City’s Department of Public Works. Fuel for the trucks is also at Rizzo's expense, not the City's."Rizzo Rewards” steps into the void of the old “Recycling Perks” program, which was discontinued over concerns about cost and dissatisfaction with the program.
Parks &
Recreation
Dine Out
Shop Taylor
Events
Places to Explore
Government Websites by CivicPlus®
[]