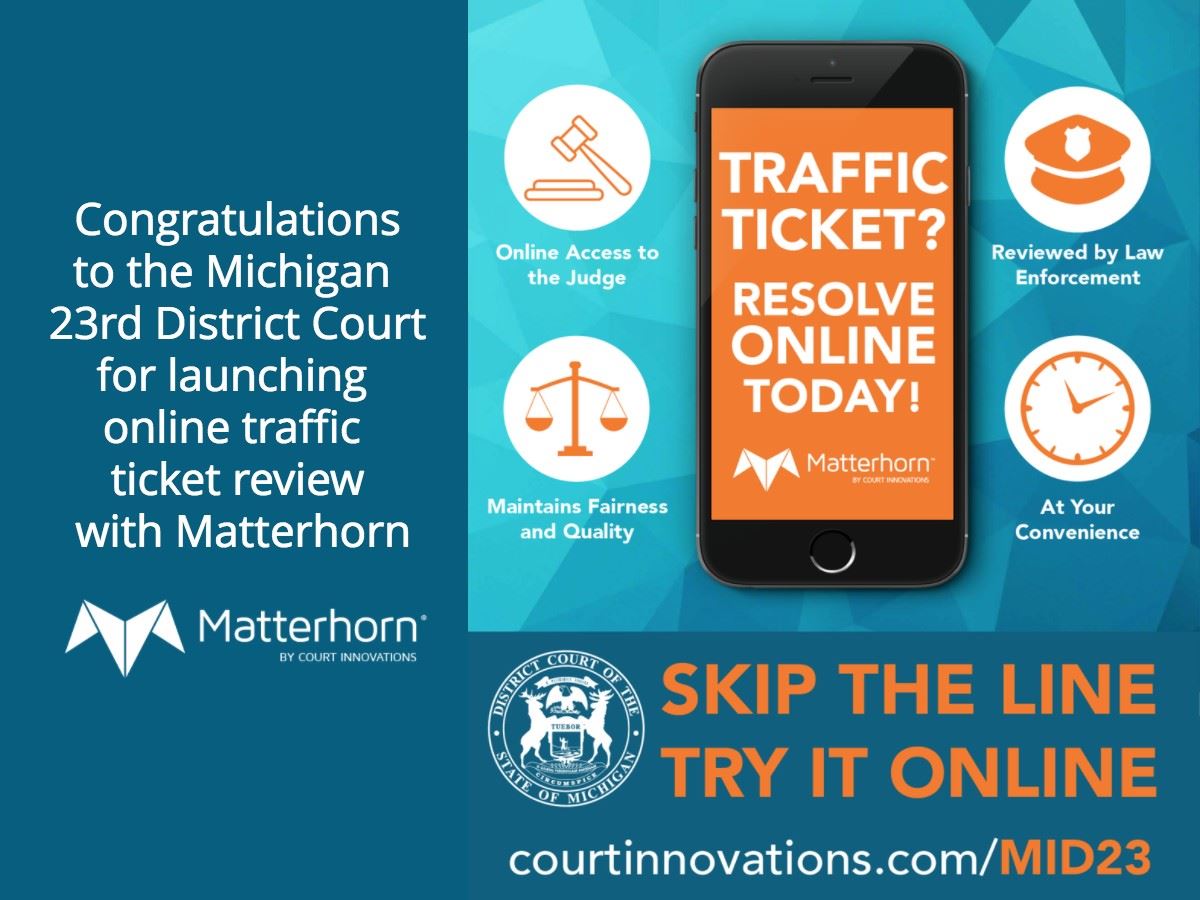 
When it comes to levels of frustration, most drivers can’t distinguish between getting a ticket and having to pay for one. It turns into a form of double jeopardy; you debate the reason for the ticket endlessly, and then you often have to make special arrangements to pay it. But that’s changing in many courts across Michigan and the United States.

Motorists now have the opportunity to settle traffic tickets faster and more efficiently through an innovative online resolution system 23rd District Court has launched. Instead of having to wait in line at the courthouse, citizens can now access the court 24/7 using their smart phone, table, or computer when resolving traffic violations.

“Judge (Joseph) Slaven and I recognize that taking time from work, school, or other obligations to wait in line at the courthouse can be frustrating,” Judge Geno Salomone said. “Now (residents) can pay or contest tickets from the comfort of their own home, at the time of their choosing. They don’t have to take time off from their job or arrange for transportation to and from the court.”

The online platform, called Matterhorn, walks individuals through a series of qualifying questions and allows them to submit their position online as if they were speaking in court. A law enforcement officer then reviews their case. From there, a judge or magistrate determines next steps, including assessing fines that a litigant can pay online. Throughout the process, litigants receive emails and text messages updating them on the status of their case. Court Innovations Inc., an Ann Arbor-based software company that originated in the University of Michigan Law School, developed the Matterhorn platform.

“Taylor’s judicial system is taking a big step forward by adopting technology that makes it fast and simple for people to have their voice heard and for justice to be served,” said Court Innovations CEO MJ Cartwright. “Across the board, when courts adopt Matterhorn, the time for a case to be resolved drops dramatically and satisfaction with the courts improves significantly.”

Matterhorn allows courts throughout the United States to handle many types of high-volume infractions completely online, saving time and money for citizens and courts. Rather than limiting judicial or law enforcement discretion, Court Innovations’ software gives decision-makers the ability to resolve cases more equitably and rapidly. Its 24/7 access and education component also empowers defendants to work with the court to resolve minor violations informally, and at a convenient time.

Taylor is one of 16 district courts across Michigan offering this online option to their citizens. In Metro Detroit alone, six courts have adopted Matterhorn to resolve several different types of cases online, including failure-to-pay and failure-to appear-warrants for qualifying litigants. Motorists who have recently received a civil traffic infraction violation in Taylor, Michigan, can visit www.courtinnovations.com/MID23 to resolve the matter online. For more information about the Matterhorn technology and how it works, visit www.CourtInnovations.com.
Parks &
Recreation
Dine Out
Shop Taylor
Events
Places to Explore
Government Websites by CivicPlus®
[]