Emergency medial transport services are returning to the Taylor Fire Department after essentially being privatized for over six years. Mayor Rick Sollars and Fire Chief Stephen Portis authored a new program that will enable the TFD to begin ambulance services by the end of 2017. The City Council unanimously passed the resolution in June.

The City has not performed transportation services for medical emergencies for the past six years (with few exceptions). Under the previous administration transport responsibilities were eliminated from the Fire Department and were handled by HealthLink, which is headquartered in Taylor (and eventually turned into Beaumont). The cutback was one of many in the TFD during that era, which saw staffing levels cut by more than half at some points and a highly controversial political debate over a federal grant subsidy take place that pitted the previous council against the former mayor, which ended up in court.

Under Mayor Sollars, who took office in November 2013 (and is now running unopposed for a second, four-year term), the Fire staffing levels and administration were stabilized. Advanced Life Support certification was re-attained. And an extension of the original Federal Emergency Management Agency SAFER grant was approved. Another smaller SAFER grant was eventually accepted when the original extension ran out. That smaller grant will, too, run out later this summer. All the while, the Fire Department recertified and performed ALS functions, but actual transporting was left to HealthLink.

The problem with that scenario is that the ambulance carrier is able to bill for services rendered, but the City was not. That meant that if the TFD responded and performed ALS functions, only HealthLink was paid. Negotiations between Taylor, HealthLink and other carriers could not bridge that financial gap, so Chief Portis turned his focus back to fire department-provided transport to fix the problem.

“With the SAFER grant expiring this year, we had to find a sustainable program that would capture these billable funds (which amount to approximately $1.2M each year),” he said.

“Department-provided transport will offer more experienced fire personnel on the scene of any medical emergency,” Chief Portis said. “We will also have the ability to capture the billable from the emergency response runs, which is a considerable amount of money and will serve an important role in the future financial structure of the department. And our department, under this plan, will accomplish the job of transporting with less staffing (down from 53 at one time to a projected 42).”

“This isn’t about politics, it’s about perseverance. We have a City Council that was supportive of this model and, over four years, helped work through the tough financial situation that the City was in. We got to a point, four years later, where we could consider this model.” 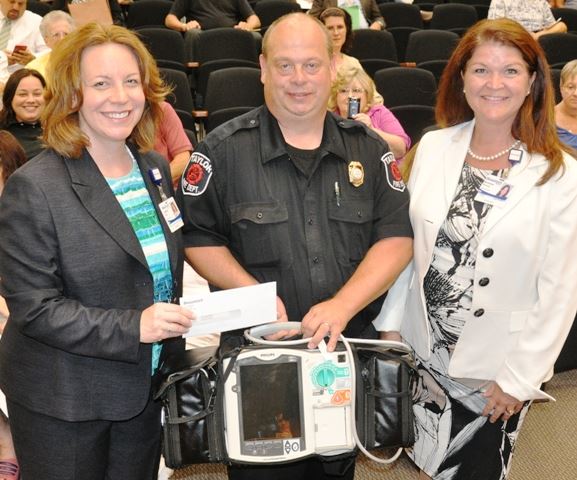 Beaumont in July 2017 donated $24,000 to the Taylor Fire Department to be used for three new heart monitors, which will be placed in the TFD's ambulances. Beaumont Taylor President Lee Ann Odom and Chief Nursing Officer Kristine Donahue were on hand July 18 to present the check to Fire Chief Stephen Portis.

Taylor Fire is in the process of restarting its City-run emergency transport program. While the fire department had been ALS certified and responsive to emergency medical needs, transport had been handled, for the most part, by HealthLink (which has turned into Beaumont). Mayor Rick Sollars and Chief Portis recently announced plans to reinstate city-run transport, and is in the process of outfitting two new ambulances (and a third one will be restored) and hiring a limited number of staffers. The program will start by the end of 2017.

According to Chief Portis, the new equipment is state-of-the-art and is able to monitor patients on scene and in the ambulance, and will relay the diagnostics directly to the hospital. The new monitors will be located in the three ambulances (one at each station in the City) while the older heart monitors that the TFD already has will be put in other vehicles in the fire fleet. "We're very lucky to have a hospital in our City that really cares about resident and emergency responders," Chief Portis said.

"These monitors will be a tremendous help to our emergency response force," Mayor Sollars said. "We really appreciate the efforts of Lee Ann, Kristine and the rest of our partners at Beaumont."