The “Midtown” vision of the Goddard Road corridor was a unique vision that stalled during the recessionary economic era over a decade ago. But it is rekindling, thanks to three major residential developments that are not as much new, as they are finally coming together.

Thanks to Menards and the new Trader’s Pointe, along with the cascade of major changes at Southland Mall, Eureka Road is taking on an entirely new and improved look in south Taylor. Likewise, Ford Motor Co.’s move into the old Masco Headquarters will key a resurgence of Van Born Road, east of Telegraph on the north side. Midtown’s vision, dependent so much on key residential opportunities, was caught in the housing development purgatory for the better part of a decade.

But Island Lakes, Cypress Gardens and Timber’s Edge could complete a much anticipated turnover of the corridor in the foreseeable future. Let’s take a look.

The subdivision has always had the potential to be one of Taylor’s finest housing tracts. It offers a beautiful entrance off Goddard and offers ponds and fountains on each side and opens to a circle that cuts east or west around the entire property, which also has an even larger pond down the east side.

According to Jacobson, the property has 84 single family lots. Allen Edwin Homes is building three and four bedroom colonials ranging between 1,658 square feet and a little over 3,000 square feet, starting in the high $250,000-range. Apex, likewise, is building colonial floor plans – its Aiden Colonial – which offer three bedrooms, 2.5 baths and are approximately 1,800 square feet.

All the way across town, located on the south side of Goddard near Holland, is 33-acre Cypress Gardens, being developed and built by MJC Companies (Lincoln Park). This offers a smaller overall setting of 50-foot wide lots and will include 90 single family homes, priced from around $200,000.

MJC has a 46-year history of residential building in Michigan and is one of the state’s largest privately owned and operated builders, as well as being awarded as one of the top 100 builders in the nation. It has deep roots in Macomb, Oakland and Wayne counties.

The builder presently has two models available to tour at Cypress Gardens, and offers a wide-range of styles and elevations including various versions of its designer-series Aspen ranch (1,560 square feet), Bayberry split level (1,986), Brookfield colonial (2,200), Cedar Colonial (2,099) and Evanston colonial (1,750). Touring the models, the wood and flooring throughout was especially impressive, as was the open floor plan and the wealth of natural lighting.

With Island Lakes to the east and Cypress Gardens to the west, Timber’s Edge sits nearly in the middle, a short jog off Telegraph Road just east of the Taylor Post Office. Similar to Island Lakes, this development was started well over a decade ago before it stopped. Since then, its incomplete condo units have stood vacant near Goddard, and the rest of the property’s roads and infrastructure hidden by overgrowth.

But that picture is changing very fast. The property was sold over a year ago to DN Development LLC and was approved by the City, but the ensuing legal process slowed the transaction. However, the developer, Rattan Sekhon, who formerly owned the Comfort Inn & Suite on Telegraph Road, now has his crews onsite and is making an enormous amount of progress toward a targeted opening in two months.

Timber’s Edge will be a gated community of 37, four-unit condominiums. Each condo is about 1,700 square feet. You’ll enter the development off Goddard between the existing two units. The roadway will turn east and then south, eventually into a large circle on the south portion of the site. Along the western edge of the property will be a large pond. When we walked the site, workers were doing a lot of clearing, and the developer said that there will be a lot of dredging in the pond area, where he plans three water fountains. Walking paths will wind through the development, which is bordered by a heavy tree line.

DN Development LLC has already invested heavily into the site. The existing structures needed a range of work, and the builder is committing to a large number of upgrades from plumbing fixtures to appliances, large ceiling fans, doors and windows, and cabinetry. The two-bedroom condos are ranch styles. They have very open floor plans, with vaulted ceilings and lots of windows. No price range has been announced for these condos as of yet. 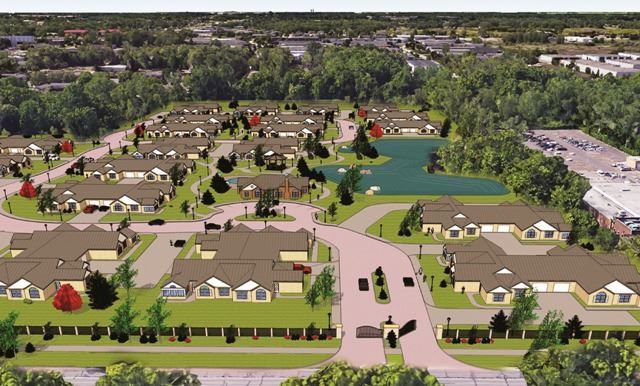 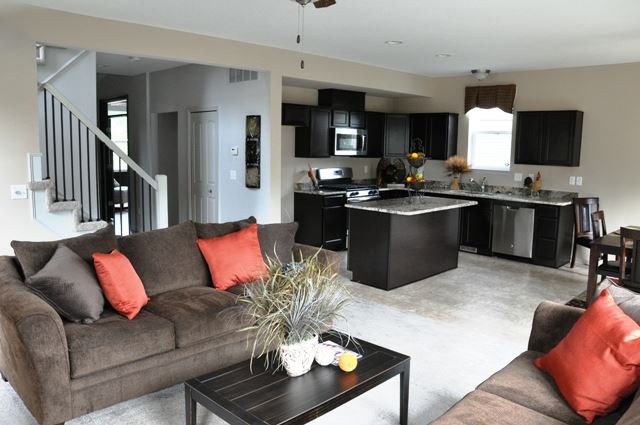 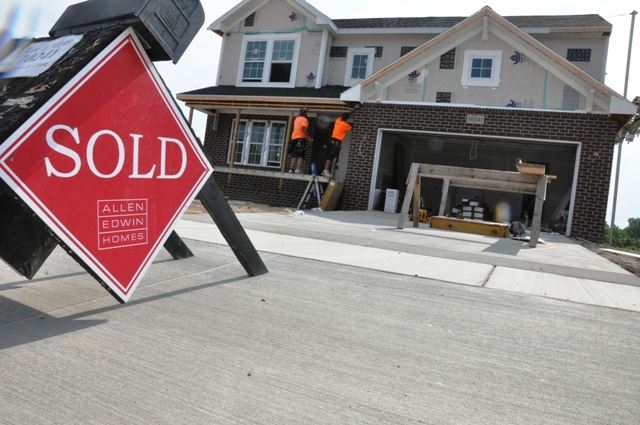