The City of Taylor, its Tax Increment Finance Authority and Wayne County have been working on a plan to vastly upgrade the infrastructure on Eureka between Allen and Telegraph roads for years. Through a settlement agreement reached in a decades-long legal tussle involving the Northline Road Agreement, they announced $17M in improvements that will kick into overdrive in Spring 2021.

According to the settlement agreement, TIFA and the country will split the cost of the project. A three-tiered process focuses on the following key points:

At the center of the entire project is the Frank & Poet Drain, which runs along Eureka Road from just east of Telegraph through the Southland Center property and into Southgate. It is an eyesore, safety and a flood-control problem.

“The drain is a big key to this entire plan,” Mayor Rick Sollars said. “Having an open county drain running through Taylor’s retail and entertainment district is a large problem. The aesthetics are horrible, it’s dangerous and … at some points, heavy vegetation is growing in the creek and prevents proper drainage flow. All of these factors combine to cause heavy Eureka Road flooding under the viaducts east of Southland Mall. Given that we have Southland Mall and Trader’s Point in those areas, enclosing and improving the Frank & Poet Drain is imperative.”

In some areas of the improvement plan, the open drain will be enclosed, which will lead to better flow and easier maintenance. Enclosure in those areas will enhance pedestrian walkways and the business frontage along Eureka Road. Meanwhile, directly in front of Southland Center, the Frank & Poet will remain an open drain, but will be refurbished and enhanced to offer better pathways and gathering places, in addition to becoming much more aesthetically pleasing. These types of steps will not only help with flood-control issues, but will make the corridor much more attractive to visitors.

This spring construction will start on state-of-the-art “Gateway” signage at the intersection of Telegraph and Eureka and in the median west of Allen Road, near the Canadian National Railroad viaduct. At Telegraph, the unique signage will be on both the north and south sides of the median.

The signage mimics the “Gateway Bridge” at Telegraph Road and I-75. The bridge was developed by the Detroit Regional Gateway Advisory Council in preparation for Super Bowl XL in Detroit in February 2006. It was one of several improvements made in the mid-2000s along 18 miles of I-94. The bridge alone cost $14M and was part of an approximately $520M in overall I-94 improvements. Inspiration for the bridge came from a 1987 article by Frank Peters in the St. Louis Post-Dispatch about a tied-arch bridge over the Mississippi River. Directly after the new signage is installed, work will begin on enclosing the Frank & Poet Drain.

The Eureka Road Corridor Improvement Plan will not only enhance the City’s main business and entertainment district, but mesh well with the new Fletcher Discovery Trail. The trail for non-motorized traffic connects the Midtown Goddard district to Heritage Park, Wayne County Community College District’s Downriver Campus, the new park being created near Pardee and Superior, and finally the Eureka Road and Telegraph Road areas. 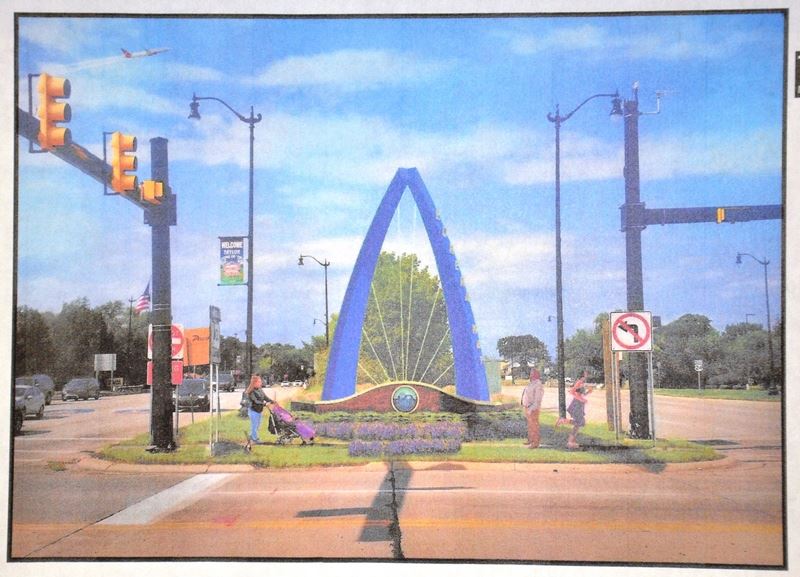